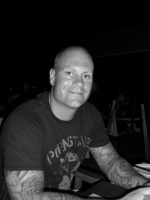 Mick was introduced to modern jive way back in 1994 by Viktor Andeke. At this point, he sparked a passion for dance which still burns to this day, and inspired him to co-create Ijig, a dance company offering classes, workshops and events in modern jive, Tango, Blues and West Coast swing, and now entering its seventh successful year.

Mick has competed many times but most memorably won the Double Trouble title in 1999 at The Empire Leicester Square and came second in The Jive Masters, 2003.

Mick has twelve years experience in judging modern jive competitions and with over nineteen years teaching experience on the modern jive circuit in the UK and abroad, he is one of the most respected and loved modern jive teachers in the country. Mick ultimately has a keen eye for style, musicality and fusions of partner dancing.