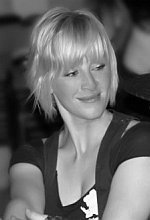 Melanie has been dancing for over 20 years. She began her training at the age of four and from an early age was competing in major competitions throughout the UK and Europe in disco and rock’n’roll where she achieved champion status and won many top titles. Several years later she achieved a junior ballet scholarship with the Scottish ballet. Melanie trained in classical ballet and performed on many theatre stages throughout the UK.

Melanie’s love of dance did not stop there, she has trained and performed in many dance styles including jazz, tap, modern jive and contemporary dance and one of her most exciting times was auditioning for the television programme ‘Strictly Dance Fever’ where she got to work with some of the world’s top dance choreographers.

Melanie’s passion is in Modern Jive and West Coast Swing, both of which she has been dancing for many years. She performs, teaches and judges nationally and internationally and her ladies styling classes have been acclaimed as the best in UK.