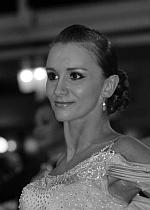 Izzy started dancing in Poland when she was 9, and performed in the Opera before reaching her teenage years. She started competing in Ballroom and Latin when she was 14. After 4 years, she left her home and came to the UK, where she found Modern Jive. Aleks, originally from Norway, had a number of trophies in both Intermediate and Advanced categories under his belt before partnering Izzy. After only one month of practice they won their first title together – Open at the UK Modern Jive Championships in Blackpool. Within another 2 years they won a total of 11 Open and 5 showcase categories, including European and World titles. Following their huge success in modern jive, they have now moved on to competing at the highest level in Latin (professional division). They continue to hone their dancing abilities by sticking to a ruthless practice strategy and taking frequent lessons with some of the top dance teachers in the world. They also perform shows at both modern jive and Ballroom Latin events.